So why Hbot works not always same way in children’s? I am not a doctor I am just a mum like you so please I do analyze my son injury I read a lot but I am not a doctor ( take it just only mum reflection on subject) ok?

Let’s say : first of all each brain injury is unique and diferent.

I am trying just analyzing what I can as dates but as I said with anoxic brain injuries we don’t have any studies with spect scans so all this discussion just my personal suppositions ok ?

Ok i post mri of Marc before Hbot and after 80h 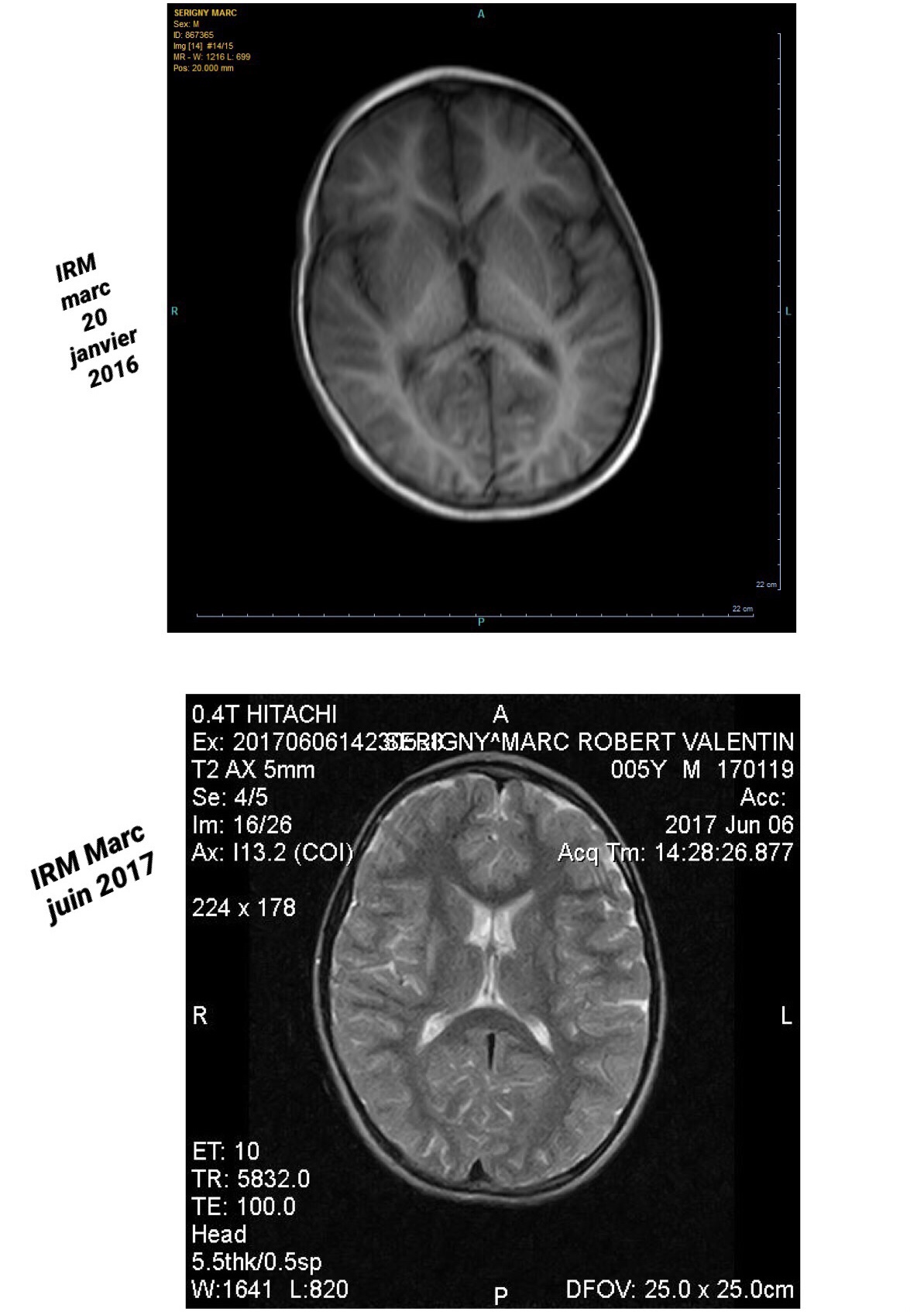 1. I think Age of child in the moment of injury play very big role : of child very small ( new born or HIE child for example) smaller is a child at brain injury more fragile his brain ( so same 25 minutes without oxygen will be more devastating on smallest child brain at birth or 1 month age than at 4 years old)

Second why age is important – because if child was already walking / full functioning child before brain injury -so after it will be retraining of his lost functions wile in new born it will be just training ( with less neurons in brain) I think it’s more difficult. But it’s just my opinion.

2. Of cause most important factor : it’s volume of Brain which was damaged!!!!

While there is no way of knowing how much recoverable tissue exists in the days, weeks, and years following brain injury , HBOT can increase cell reproduction and administer oxygen to tissue that was previously cut off from blood flow. The dormant cells surrounding the damaged tissue area, also known as ischemic penumbra, are responsible for much of post-stroke dysfunction. If oxygen therapy can revive these cells, lost functionality may return to the individual.

And this you can say only by MRI and Spect. But again for small children’s I am sorry but MRI don’t give exact informations ( that’s why neurologists don’t like to do MRI for cp children’s too early age …. we can really see at age 4-5 years but before it’s very difficult).

But still : Qualitative assessment of brainstem injury on T1 and T2 images in neonates with HIE may provide information on injury severity and risk of death, but objective quantitative data such as ADC values are lacking. ( if you want to read about read this study:

These infratentorial areas have high concentrations of excitatory neurotransmitters (e.g., glutamate) and are especially vulnerable to the profound hypoxia-ischemia that is typical in HIE. The cerebellum acts as a satellite system of established cortico-basal ganglia networks in neonates. 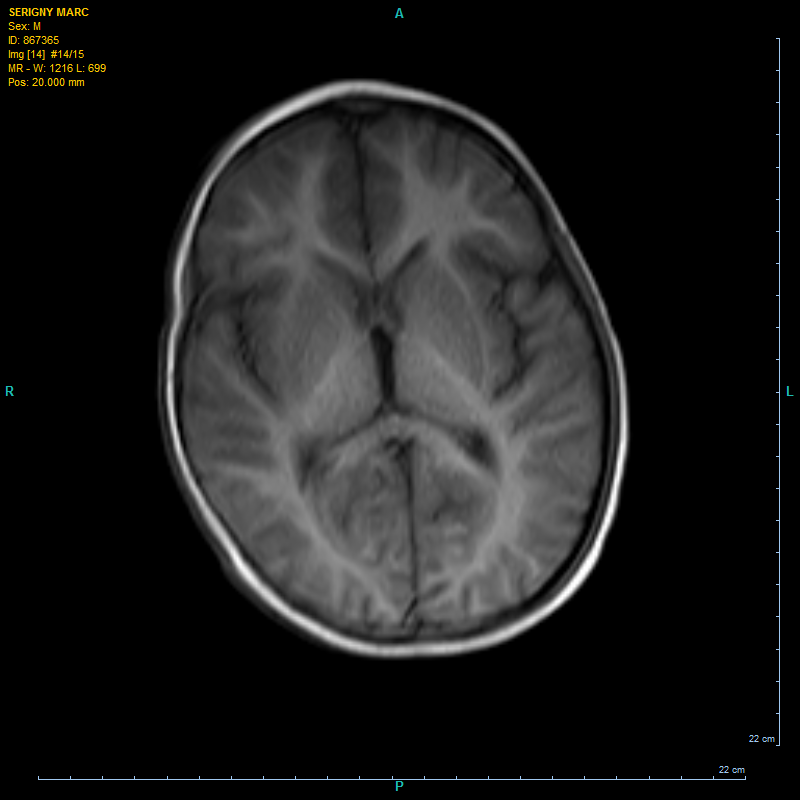 I will post his MRI ( after Hbot a bit father in this article ok?)

3. So here we come fore 3d factor : did child was cooled after brain injury???? I believe that it’s helped to my child ( yes his body temperature was cooled it’s protocol for cardiac arrest but not always for HIE ).

( it’s after reading this book I think about ) 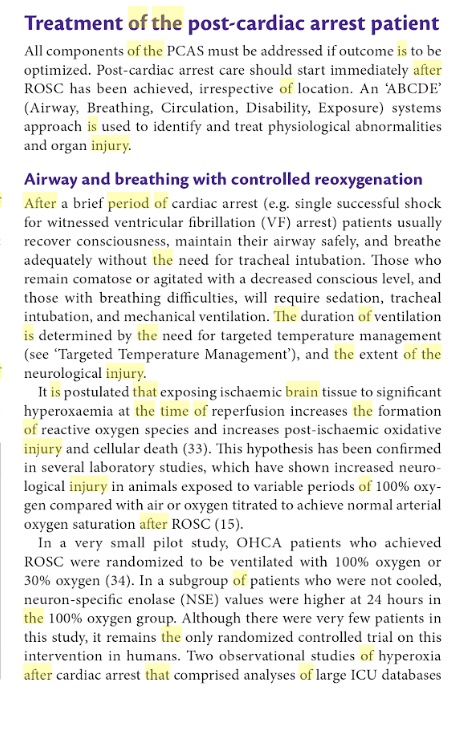 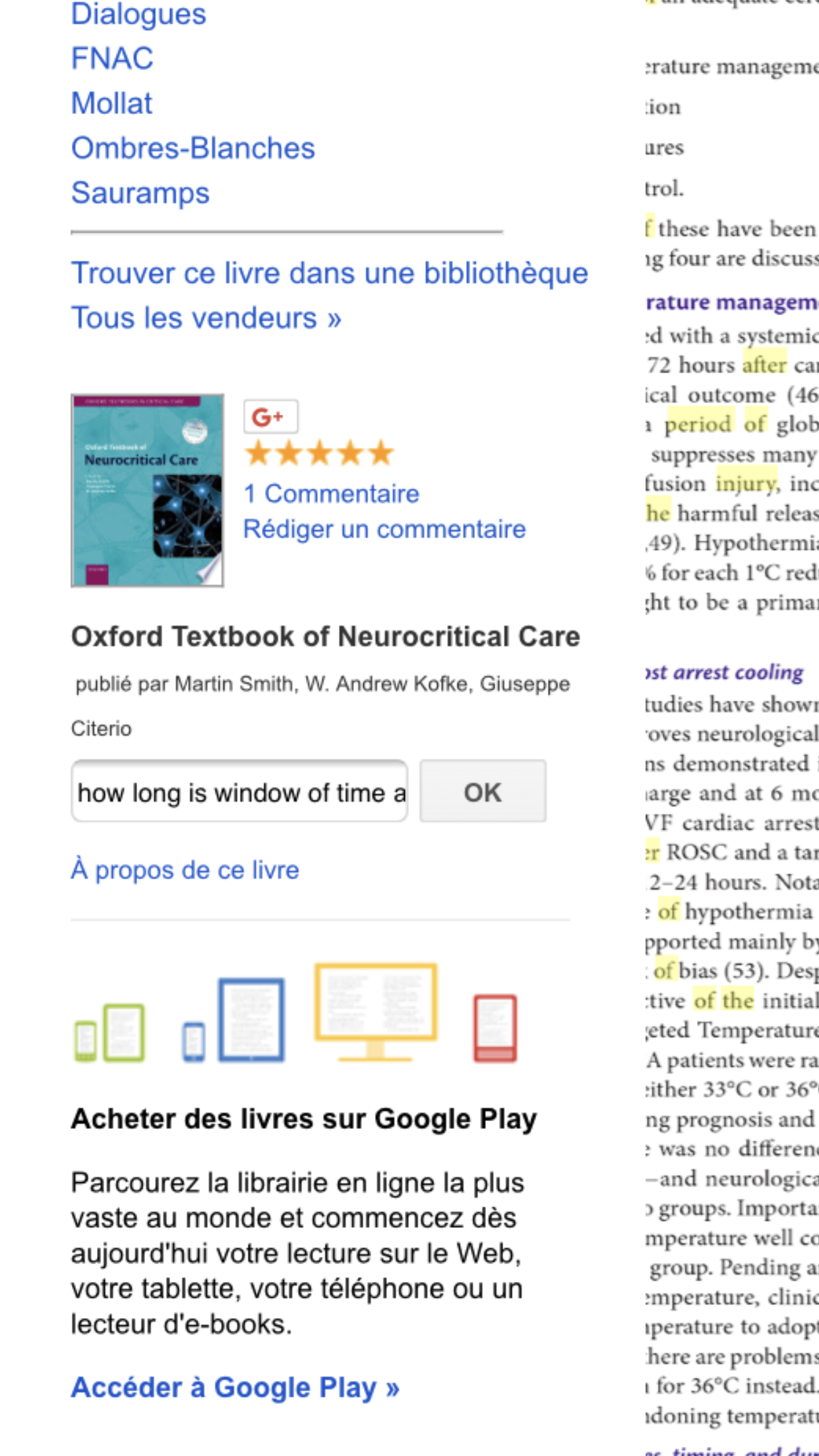 This lecture is also really good explanation why Hbot is better ( than Normobaric oxygen) we get oxygen in plasma! Lisen at 44minutes :

( and by the way I agree about multiple approach with Sherr – before starting Hbot in Israel’s for my son – we did batteries of blood tests and also tubes in ears – in order to protect them against barotraumatisme).

5. And you see naw what I think about Hbot ( we don’t have real agreement between doctors what is the best protocol for brain injury – and what kind brain injury ? By the way ?) TBI or anoxic? ). Parents has some possibilities: 1,5ata 100% oxygen is most used in hard chambers by centers ( sometimes is more pressure but honestly it’s the mostly use regiment for nerology in hard chambers) and I believe that in case of my son really oxygen in Hbot made biggest changes but as I posted before in Hbot conditions contrary to Normobaric 100% oxygen…

About other possibilitiy: 1,3ata without oxygen

Of cause first of all it’s the most “ not risky “ protocol for very injured children’s so may be also that’s why a lot doctors prefer start really very-law presssure ( case child brain really very damaged) and if child very small -very fragile.

I believe that in acute period use oxygen after anoxic injury just after it is more beneficial than without oxygen….. but it’s consern acute period 2-6-8 months after injury!!!!)

( I am not talking about CP-ok it’s chronic condition already) this we was discussed in study which compared pressures for cp.

So hope my reflections helps….

So for Marc Sudden cardiac arrest happens to my baby at 4 years old. Because of not diagnosed WPW.

He has cardiac arrest for 25 minutes

He was on the hyperthermic protocol ( cooled)

He was obliged to learn to do everything again… ( he was just 4 years boy when he has to pass through all this: When My son woke from life support after rewarming his body He had regular heard surveys 24h/24 because of regular SVT , kidney failure, respiratory failure & and he was on a feeding tube as well…. and he was blind and can’t talk….. but constantly crying…..only thing which calm his down a bit was my voice …

He has no memory of what happened but he has PTSD

He couldn’t feed himself

We passed by phases : wheelchair and walker and he hate both of them….

But yes I am blessed that he is alive.

MRI’s after 80 hours Hbot in Israel: 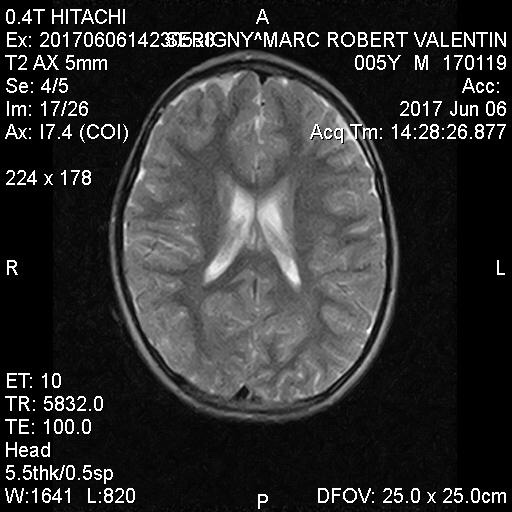 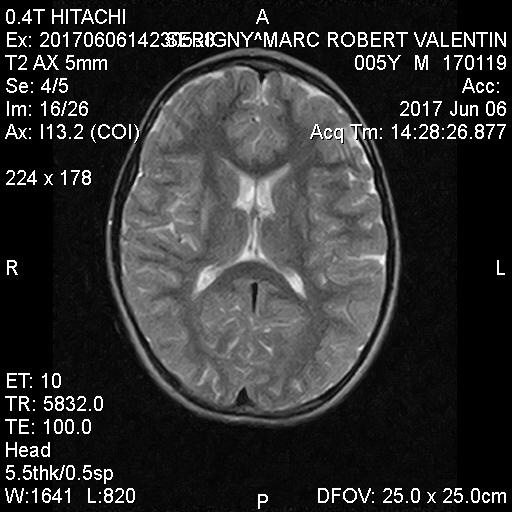 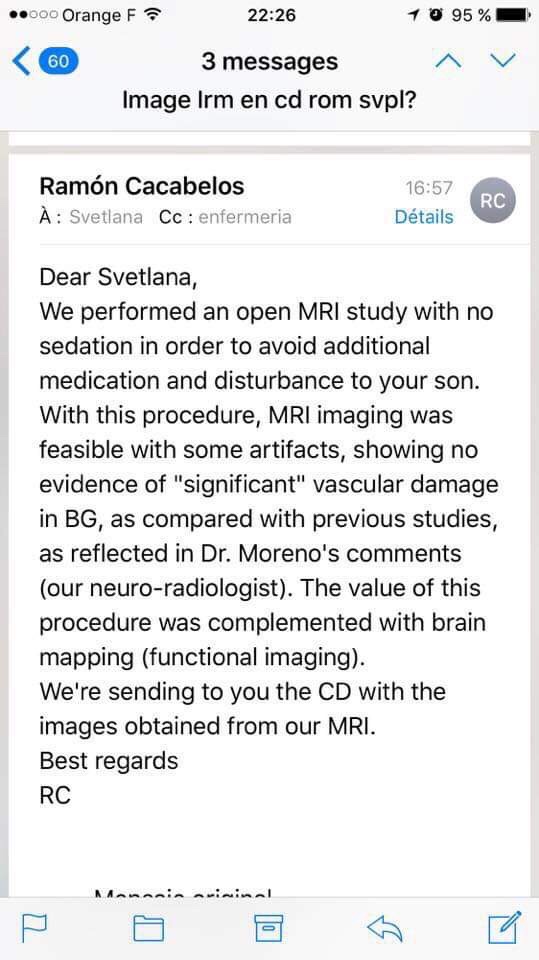 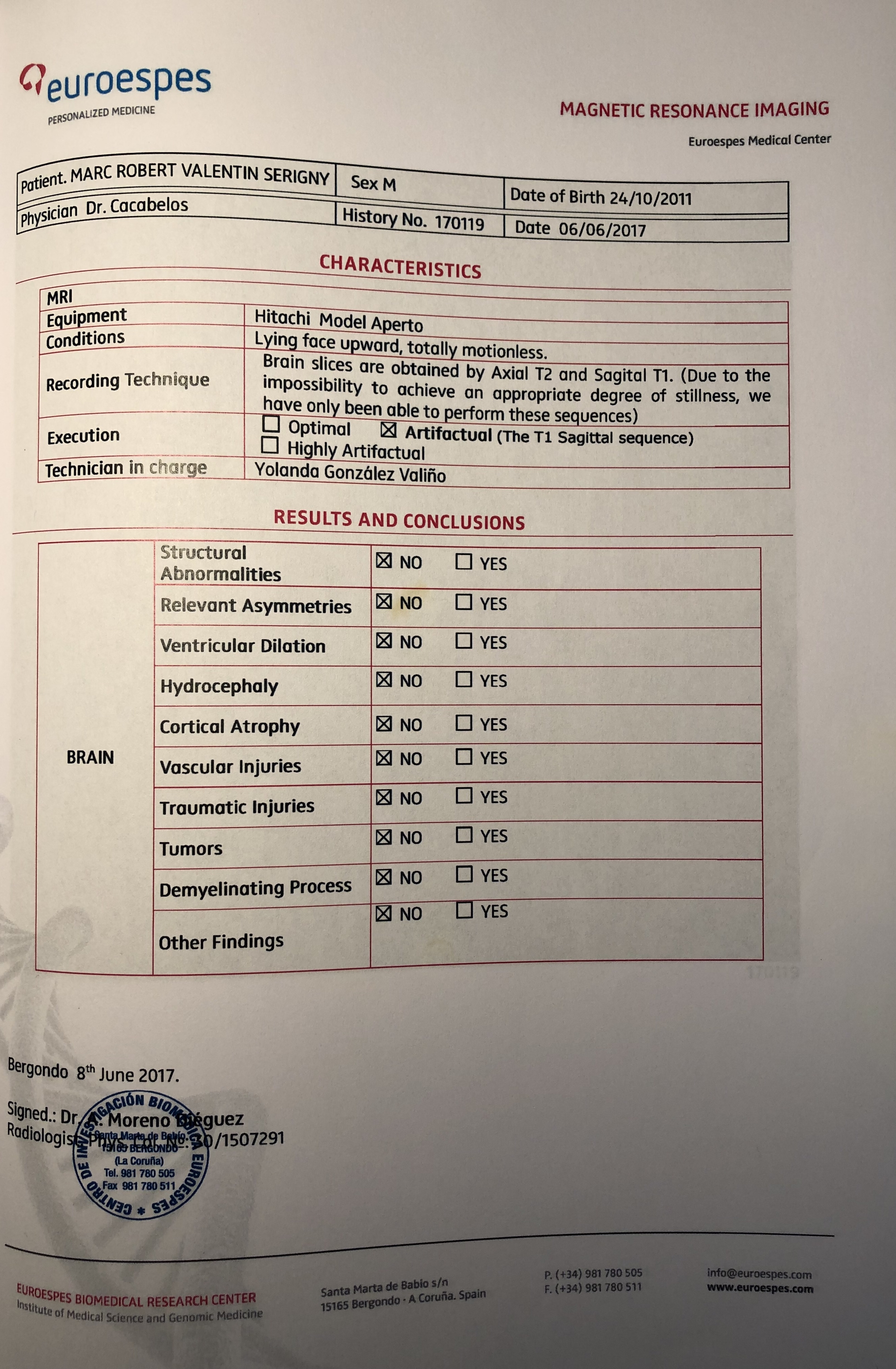 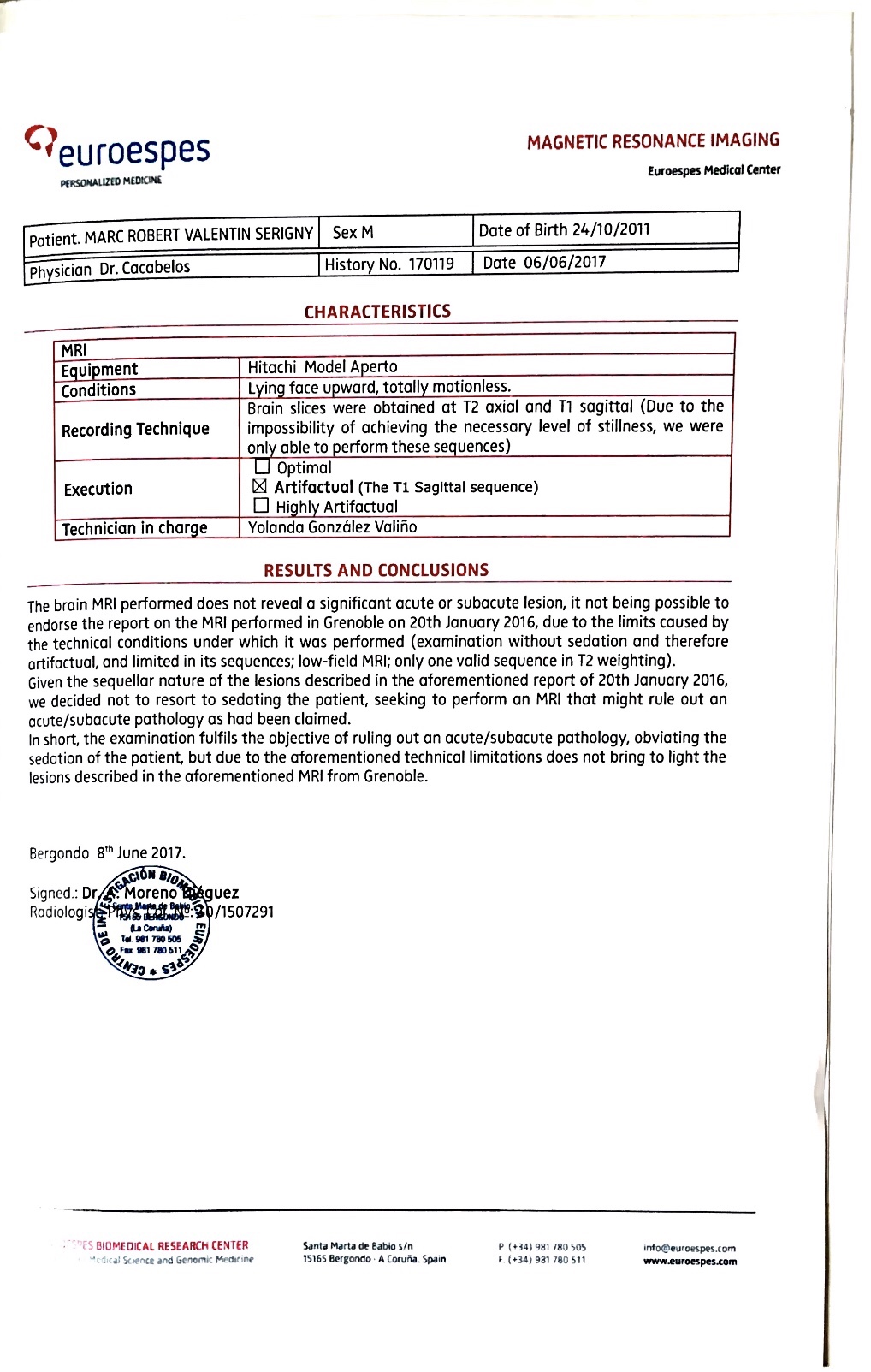 So 2 AQM without pons:

I will do 4th AQM in September -October 2019 so hopefully I will get scientific datas for PoNS long therm use ….

If you want more read: