Who wants to know what doctor Marois think about this Collet study and about haw it was designed and haw datas was presented ?

Follow my link and read hole Dr Marois interview about: 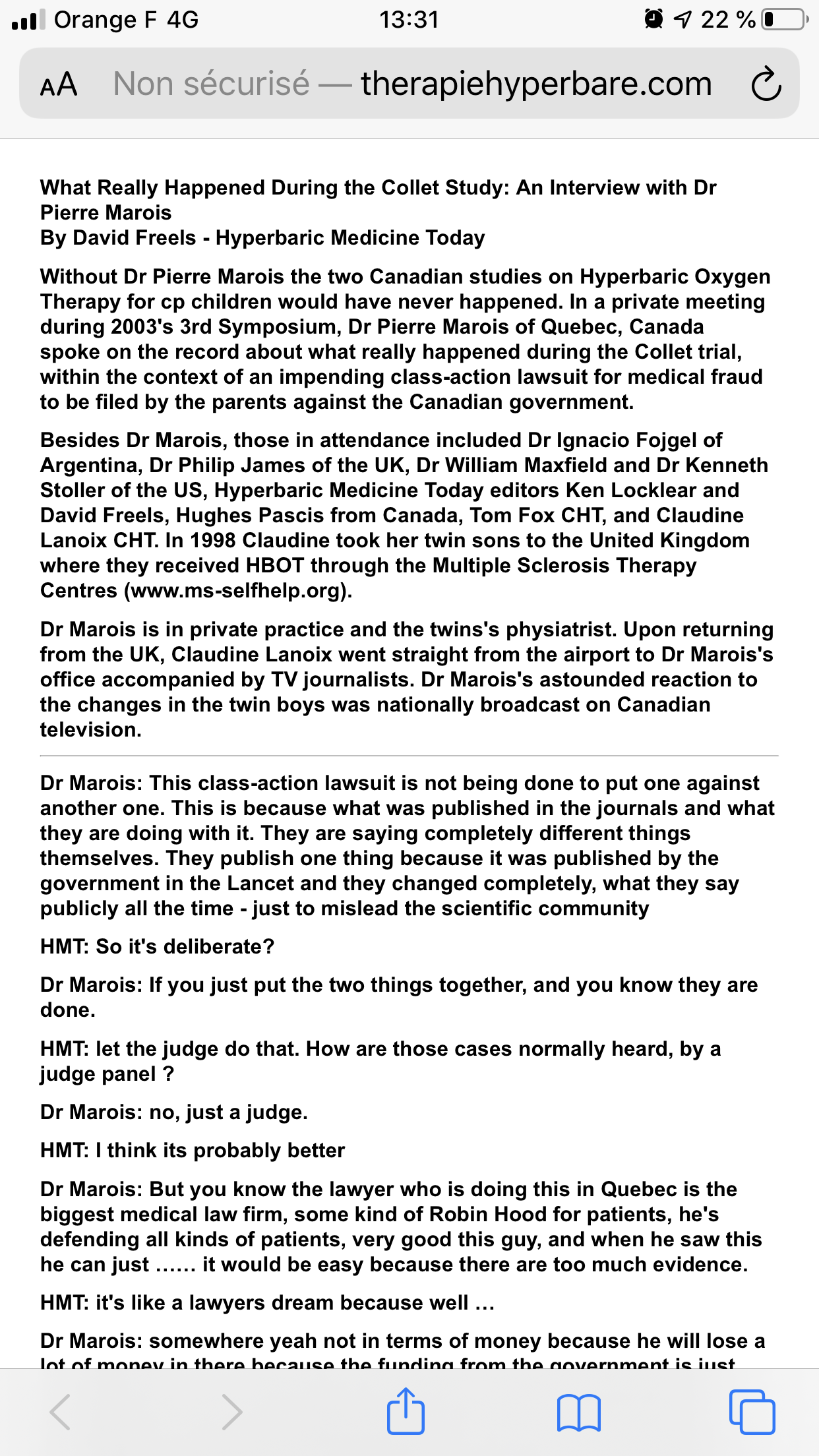 Hère what we are talking about: collet study

If you want to contact me ( not spam) send me mail:

And I will see if it’s really professional mail or just a spam ( haw to create my blog and not about nerologie – all spam I put in garbage !!!)

My blog is free I am not gaining money from it I don’t have time for useless comments.

I invite you to see all 38 presentations :

As Ted Fogarty posted this I suppose we can all share

On link you can find all speakers from last dr Harch symposium 2019!!!!!

Just try to see yourself!!!!

Answering on many requests:

HBOT – What does it do, and how does it treat medical conditions :

The latest seminar by the best experts on healing the brain from Israel, June 2019

Prof Shai Efrati is the leader in the field of treatment utilising HBOT and achieving what DRUGS can’t.

And if we are talking about previous studies with 1.2 ATA on 21% inhaled oxygen (ie, air) cannot be regarded as an inert or sham control!!!!

« In addition to objective evaluations, there are inherent ethical and logistic difficulties in handling the sham control in HBOT trials. HBOT includes two active ingredients: pressure and oxygen. Pressure is needed to increase plasma oxygen, but the pressure change alone may also have significant cellular effects. Additionally, the greatest effect of pressure is in human tissues that are under tight autoregulation pressure control, such as the brain, where the intracranial pressure is normally 0.0092–0.0197 atm.23 24 To generate a pressure sensation, the chamber pressure must be 1.2 ATA or higher. However, such a change in environmental pressure (from 1 ATA to 1.2 ATA) and subsequent tissue oxygenation (with an increase of tissue oxygenation by at least 50%) has a significant biological effect. Thus, sham therapy in previous studies using 1.2 ATA on 21% inhaled oxygen (ie, air) cannot be regarded as an inert or sham control but rather as a lower dose of the active ingredient.4 20 In regards to a possible effect of vasoconstriction of the large blood vessels induced by hyperbaric oxygen—it has been well established that the tissues are saturated by hyperoxia and do not suffer from hypoxia, as the vasoconstriction effect is compensated by increased plasma oxygen content and microvascular blood flow.

Any increase in pressure, even with reduced oxygen percentage, cannot serve as a true placebo, but rather as a low dosage of the active ingredient, further supporting the need for objective data gathered from large cohorts of patients suffering from PCS and treated by HBOT. 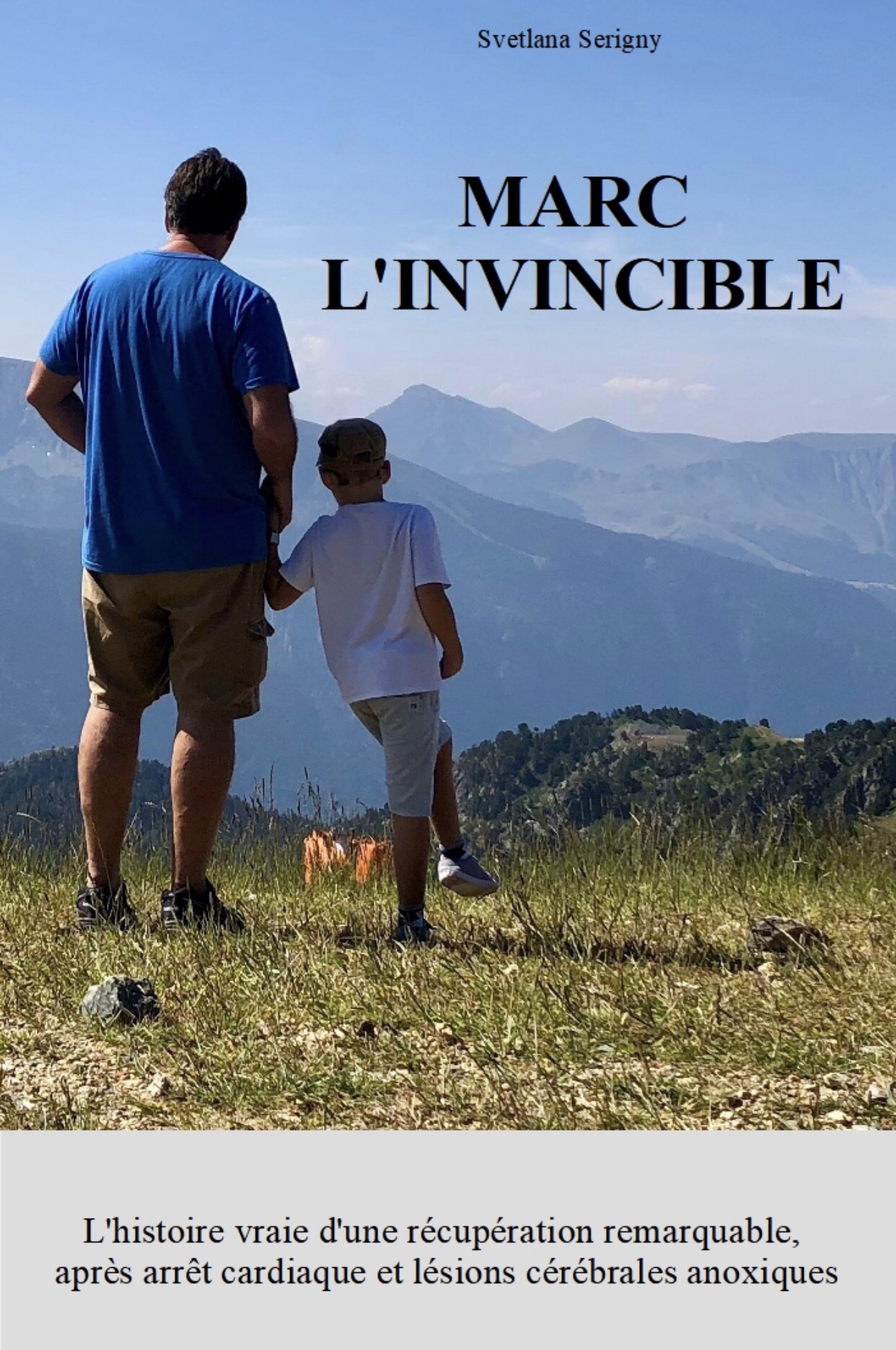 Here is my book « Marc L’invincible » is now online and available * for purchase in the Kindle store: (in French)

I will do English translation ( just give me some time)

2) This was made on animal model but UCB seems to be batter choice than MSC….

« This study is the ﬁrst to compare the neuroprotective efﬁcacy ofUCB cells versus MSCs for inﬂammation-induced preterm braininjury. Both UCB cells and MSCs have protective beneﬁts for thepreterm brain, but their effects on white matter are different.MSCs were strongly anti-inﬂammatory, dampening multipleindices of brain inﬂammation at the cellular and gene level. Incontrast, UCB cells showed a reduced ability to mediateneuroinﬂammation, but importantly, prevented apoptosis-mediated cell death and protected mature myelinating oligoden-drocytes. These differential effects of UCB and MSCs are likely dueto speciﬁc actions of an isolated cell population (MSCs) versus astem/progenitor cell mix (UCB). «

In response to LPS-induced preterm brain injury, administration of

MSCs had a global effect on dampening brain inﬂammation,

which in turn may have detrimental effects on brain repair and

normal development. MSCs did not improve survival of critical

oligodendrocytes and did not prevent apoptosis-mediated cell

death. In contrast, UCB was neuroprotective against cell death and

normalized the number of mature myelinating oligodendrocytes, but did not display the same anti-inﬂammatory effects as MSCs.

Our results indicate that UCB is a more comprehensive therapy for

the mixed cell population in UCB, and their differential actions. »

thé problème i think we need be very careful with dosing MSC:

and are a much larger cell (average 25 μm), limiting the

concentration that can be administered in a single dose without

« Therefore, a global dampening of inﬂammatory mediators with MSC administration (as seen in the directional change of the bars

in Fig. 4) may interrupt normal brain development and it may be

such that reducing an aberrant pro-inﬂammatory cerebral

decreased white matter expression of IGF-1, which is essential

types within the CNS, particularly the glial cells.

proposed as a rescue therapy for hypomyelination,

and protective for oligodendrocytes. »

« The dampening of inﬂammation and growth factor expression

by MSCs may be a concern, further investigation into this ﬁnding

“It is traditionally considered that a child with cerebral palsy reaches half of its potential to develop motor skills by the age of 5 years and the maximum possible development by 7 years. The potential achieved remains at the same level or may even worsen with age. In our experiments, all children were over the age of 7 years. These results can significantly expand both the scope of this technology in the rehabilitation of children with cerebral palsy and improve the prediction of the effectiveness of the therapy used for older children.

Brain TLNS enhances the effect of physical rehabilitation, activating vast areas of the brain, increases the efficiency of existing neural networks, increases the likelihood of new synaptic contacts (synaptogenesis), enhances the brain’s innate ability to improve motor function. The fMRI data alone confirms that the human brain is plastic at any age and is capable of an amazing reorganization, the mechanisms of which we are just beginning to explore. The dynamics of changes in DMN and functional connections between the first and second timepoints turned out to be more vivid than between the first and third timepoints. That probably indicates a delayed rehabilitation effect.”