Neuralink what do you think?

I am sorry I am brain injured child mum so i am scepical and veru critical… ok? So this is just my thoughts about Neuralink presentation:

1)Cortical only level for naw ( they don’t go yet deeper)?

3) I am sorry that I am so critical but I am firsthand want to see proofs that it’s works ? To put in head of healthy pigs don’t prove anything to me ?

Not into paralyzed pigs ?!

4) Honestly he was talking about deep brain stimulation ( at the beginning) I personally know 3 children’s – the inventor of DBS is french neurochirurgien -as I was told – (professeur Philippe COUBES ? )I met him – so in 3 children’s I know which had sdb by him – it’s in fact don’t work 2-3 years – after still searching level of stimulation neded ….

I don’t know even one person for whom it’s works DBS? there’s re a lot published studies and they are sayin it’s works…where they 150000 persons for who un it worked I am searching them for 2 years! ? Any testimonials?

5) What they are going to do with atrophy of mussels and with bones deformities?

they are giving technical briefings to bring in the best talent to bring this device to every person who needs it (great, but of course CEO Elon made $ 30,000 billion this year)?

Our brain is like an electrical network, and when it is damaged, it emits weak signals (but can electronics be compared to biology?) Neural communication amplifies weak signals (and much more in terms of reading and writing to the brain) and in the distant future will the tertiary level of the brain’s AI to do what the neural connection cannot do. Is this the largest technological and medical development since the 1800s. ????? I am not sure about this ….

Have they already got FDA approval for a breakthrough device? Is it money or real progress? An artificially implanted chip? I have a lot of questions and I am very careful about this …

So what is all this ?

All this is PR and money making? Better to promise to send people to Mars. It is normal to collect money from dreamers, but not from the sick.

Yes. Work is underway on impulse-controlled prostheses. And if you manage to decorate the signals, then you can mentally control some auxiliary devices. It is a well-known misconception that we can surpass our creator. It is enough to look at the medieval paintings of how they tried to make a man with the help of springs and gears.

They do not yet know how to translate the chemistry of the brain and thinking into a conscious binary code. While they can train a person to strain something and relax something simple. For example, take a glass of prostheses controlled by a brain impulse.

Also : « « Former employees told Stat News that the company was chaotic, and that researchers were under intense pressure to rush through projects. Scientists were sometimes given weeks to complete projects that should take months, for example. “They are building a medical device and a surgical approach to implant that medical device, and they’re approaching it with the use of a tech company — move fast and break things,” one employee said. »

What could go wrong ah?

« The announcement of the technology was based on two white papers published in bioRxiv, reports written by NeuraLink scientists and not peer-reviewed. In both published white papers, no attempt has been made to use the recorded neuronal data for the purposes of a BCI, and no attempts to simulate neurons through NeuraLink have been reported.

It’s fairly likely the company has achieved more than is reported in the white papers, the nature of scientific research being that breakthroughs are sometimes made years before they can be published. »

« Neuralink’s microscopically slender electrodes are designed to provide longer-term recording than current electrodes and produce less tissue damage, but it’s still not clear how this will stand up over time. In the first study cited, recordings were made from one rat implanted with the electrodes for 60 days, with the implants falling off prematurely in the other three rats studied.

By comparison, the Utah array has reported longevity of six to nine years when implanted into a primate brain. »

You see I eventually don’t use any my own words ….

Apoptosis is programmed cell death and, as the description says, it dies over a period of time and the cell is partially recycled. This tends to be planned and a result of unused or misplaced cells.

Necrosis is quicker, uglier and releases toxins which are not ideal for the brain. This happens more often with trauma.

There is also a large gray area in the middle where cells can die with properties of apoptosis and necrosis. Using microscopes it can be very difficult to tell which is happening.

However, in cases of blunt trauma, if certain cells (e.g.: neurons) die then the dead cells may be engulfed and/or replaced by other cells in the brain such as [micro]glia or astrocytes.

But I am asking you to help us parents to get more support for fda for hbot:

Christian G. Huber friend of mine

Honestly I don’t personally liked TheraSuit we tried long time ago in Spain for Marc ( he hated that it was tearing him all diferent ways and didn’t supported it more than 3 minutes ) ….may be I didn’t tried too long enough but it was all as our experience with suits for naw….

Who created the association near Paris)

They did french study in her conductive education centre for Mollii: 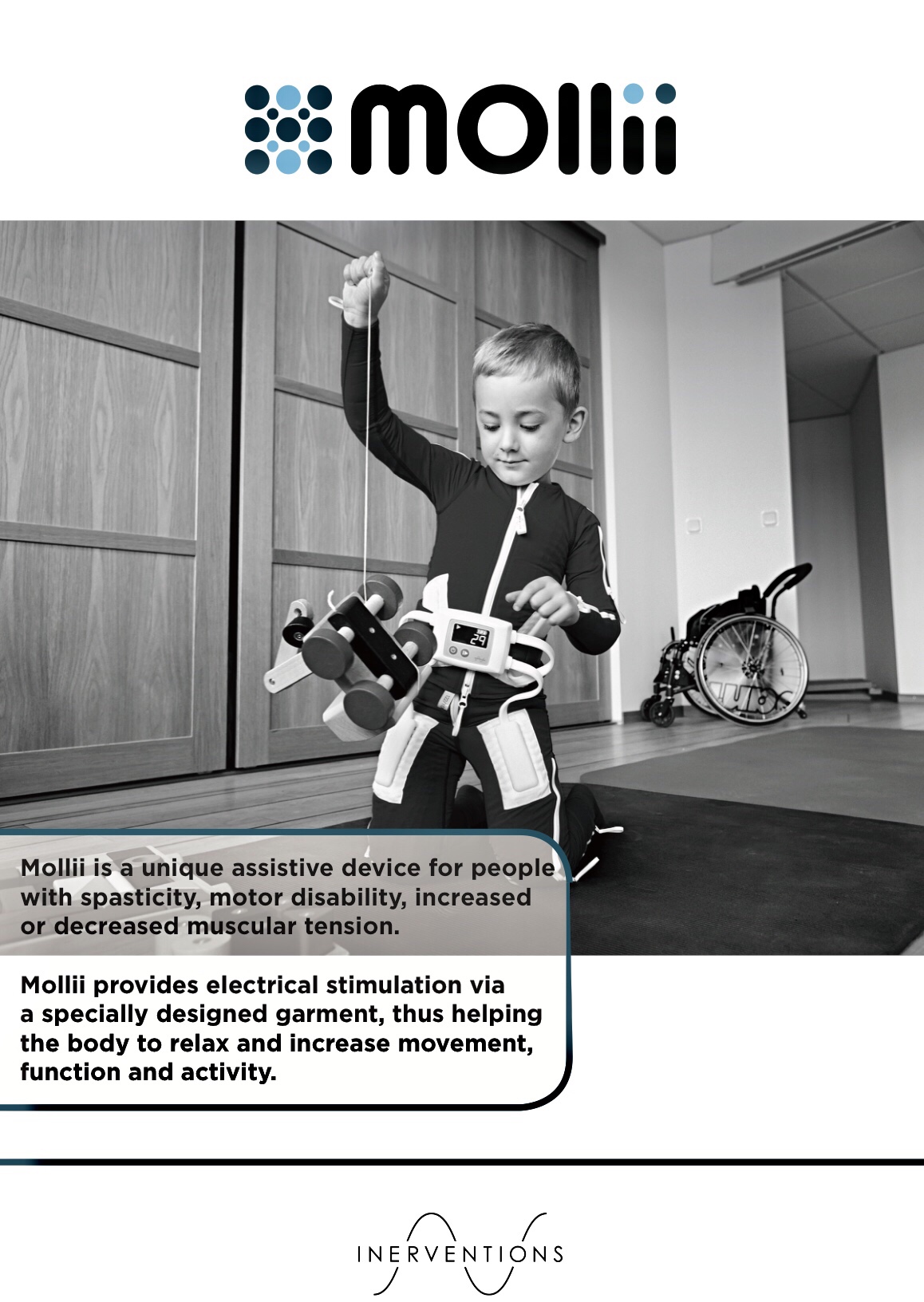 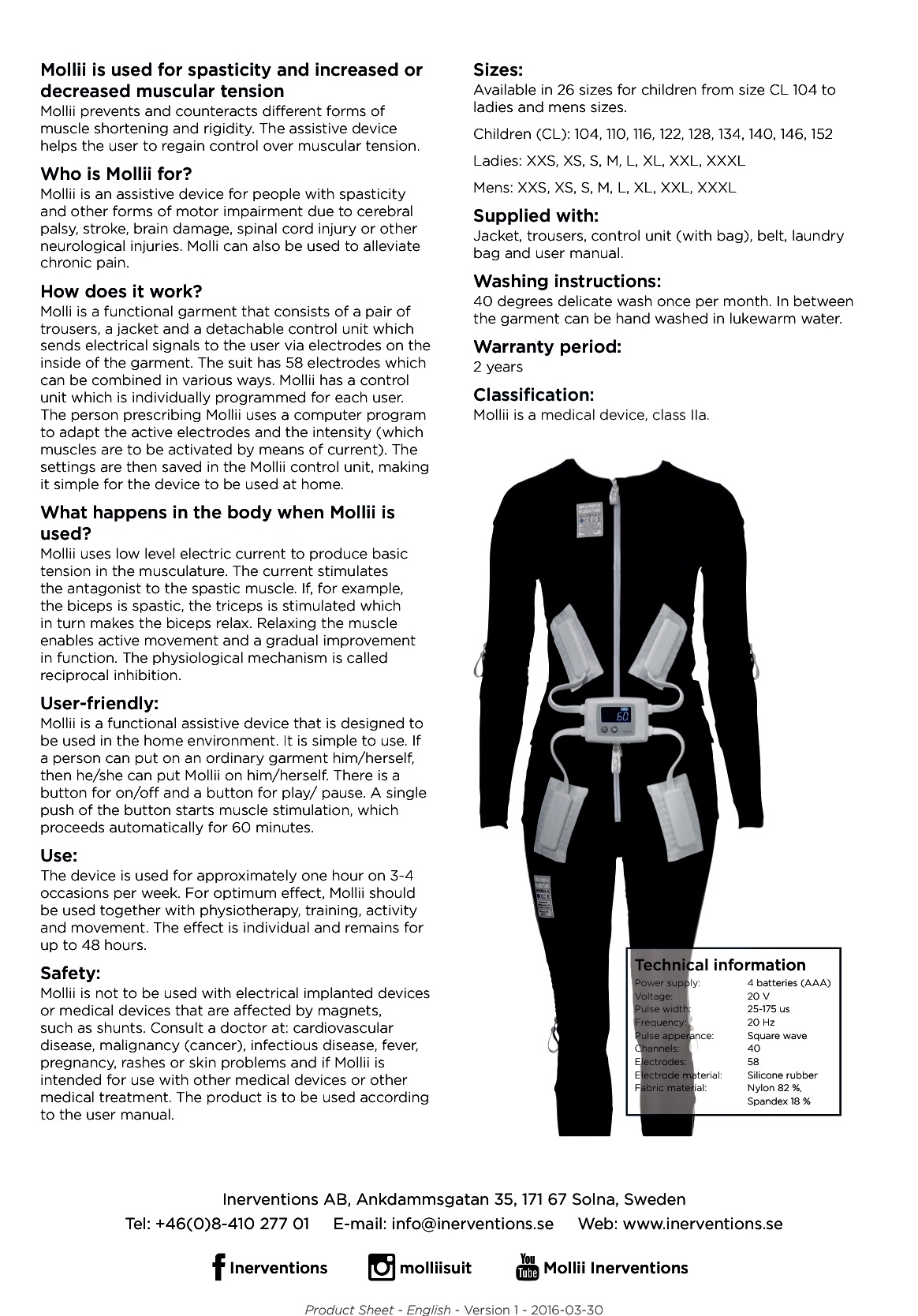 I never tried yet for my son Marc because he has electrical suplimental pathways in his heart (wpw syndrome) I wasn’t convinced that it was safe to try it … next September 2018 I will go in Italy to check his WPW and if it’s ok after 5th operation and we get Professor Pappone agrément so may be I will try it….this winter

So I can give just informations about I can’t testimonials about haw it works ok;)?

So informations from this site:https://www.myelin.org/2017/08/mollii-suit-assistive-device-for-muscle-stiffness-spasticity-motor-disability/

« The Mollii Suit is a new assistive device developed by Inerventions, a Swedish company, that can “relax spastic, tense, and aching muscles.”  The company was started by Mollii inventor Fredrik Lundqvist in 2009. According to their website, Mollii is currently being used by people with cerebral palsy, stroke, spinal cord injury, acquired brain damage, and neurodegenerative conditions. Inerventions mission is, “creating opportunities for active movement and functional improvements, and providing everybody with the chance to live a dignified and active life.

How does it work?

The suit has 58 electrodes which can be combined in various ways. Mollii has a control unit which is individually programmed for each user. The person prescribing Mollii uses a computer program to adapt the active electrodes and the intensity (which muscles are to be activated by means of current). The settings are then saved in the Mollii control unit, making it simple for the device to be used at home.

Mollii uses low level electric current to produce basic tension in the musculature. The current stimulates the antagonist to the spastic muscle. If, for example, the biceps is spastic, the triceps is stimulated which in turn makes the biceps relax. Relaxing the muscle enables active movement and a gradual improvement in function. The physiological mechanism is called reciprocal inhibition. » 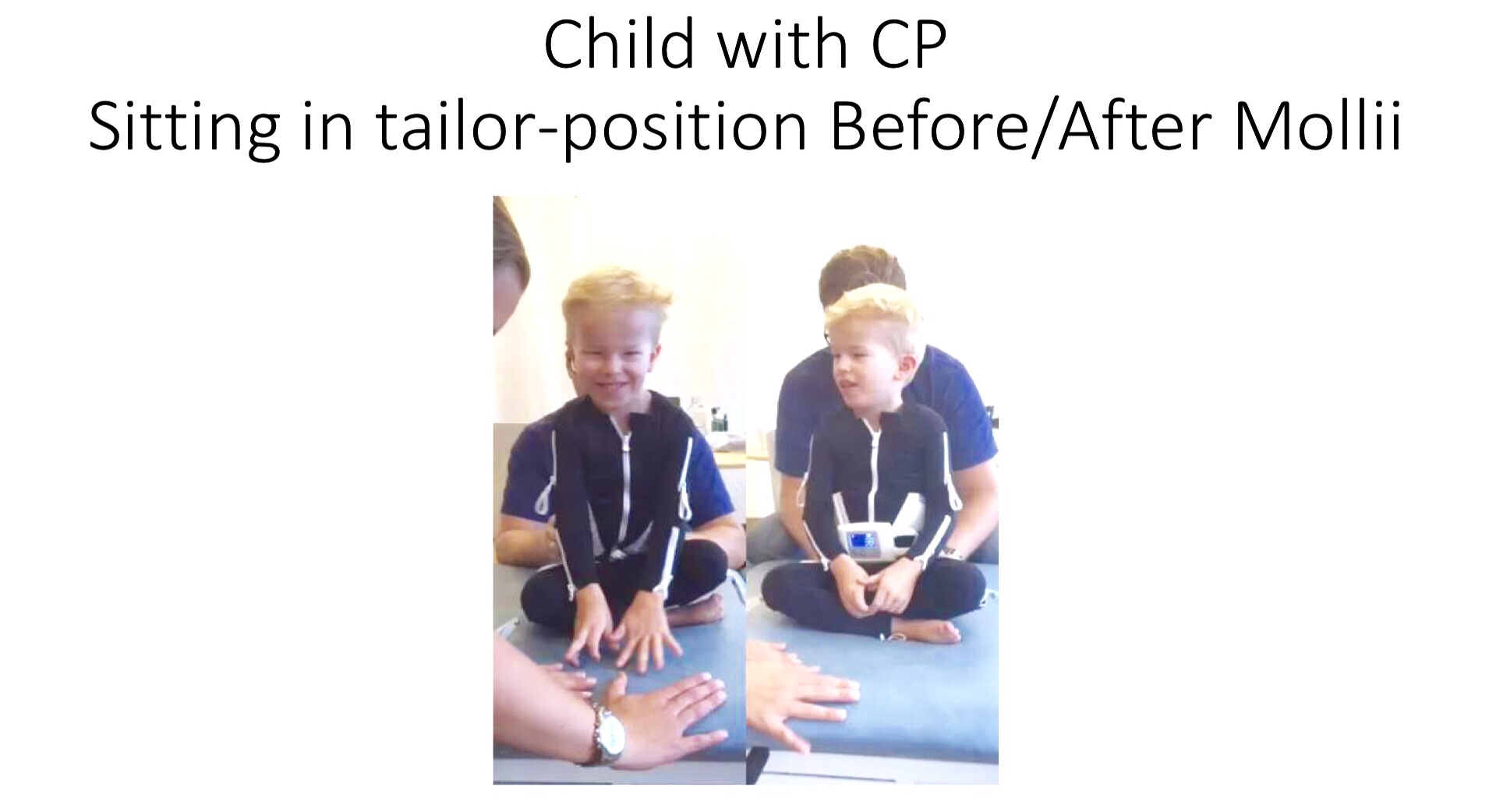 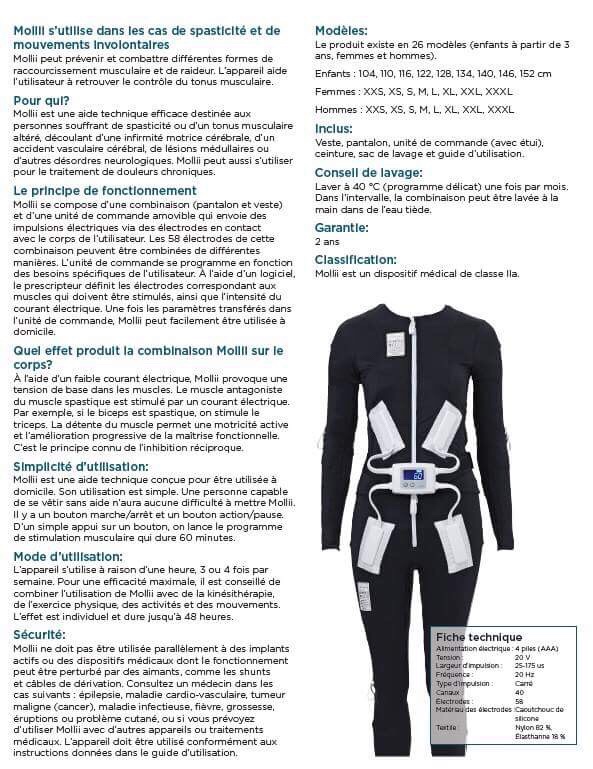